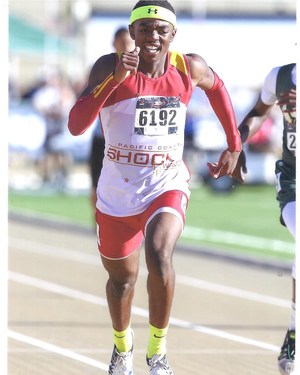 Congratulations to freshmen Everett Steward and Tyriq Granillo for their outstanding performances at the USATF Nationals Junior Olympic Track & Field Championships at Sacramento State University – July 23 – 31, 2016. Click this story for more details.
Representing Pacific Coast Shockwave Everett won the 800m by breaking a 15-year old record in a 1:55.00. Everett also won the 400m in an exceptional time of 48.23. Everett’s times would have placed him in the CIF-State Finals in both events. Everett also ran anchor leg on both gold medal teams, the 4x400m – 3:27.49 and broke a national record in the 4x800m – 8:23.70. Cathedral Freshman Tyriq Granillo was a part of this team. We wish Everett and Tyriq continued success as they transition into high school as a student/athletes.