In 1921 the National Association of Secondary School of Secondary Principals (NASSP) officially established the National Honor Society. Though many local and regional honor societies existed prior to 1921, no nationwide organization had been founded.  Under the leadership of Dr. Edward Rynerson, principal, the organization grew to more than 1000 chapters by 1930.  Equipped with a constitution, an emblem and a group of dedicated principals as coordinators, the new NHS organization quickly developed into one of the country’s leading educational groups with about 15,000 chapters nationwide.
Four main purposes that guided the chapters of  National Honors Society.
Cathedral High School NHS Chapter is called Phantoms Fratrum Scholarum which stands for Fraternity of Scholarly Phantoms.  It is affiliated with the national organization.  To be a member, one must apply every semester. Eligibility is based on a cumulative grade point average of at least 3.29 per semester, on service, leadership and character. 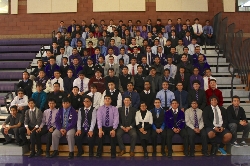