Cathedral High School participates in the Regional Private Schools Academic Decathlon Program. Our team members meet at lunch on Tuesdays and Thursday and study in groups of four as well as on their own individual paces at home. We start in late August and work up until The Regional Competition in early the first Saturday of February.
This year the Novel was THE SUN ALSO RISES by Ernest Hemingway. The other subjects topic of emphasis this year were World War I, Science/Genetics,Math/Trigonometry, Art and Music from World War I era. Speech,Interview and Essay are also events which total the ten event competition.
Each Team of nine must consist of 3 "A", 3 "B" and 3"C" students. This year we took 3 teams and two alternates. Medal placements will be announced this Saturday at The Awards ceremony being hosted at St. Monica's High School. 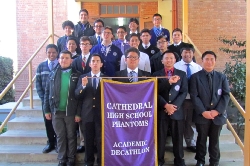